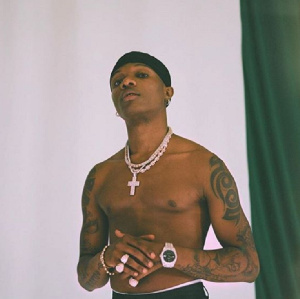 A video making rounds on the internet captures a moment when an excited fan grabbed Wizkid’s leg, tore his shirt, and tried to bolt with his sunglasses on stage.

The singer who performed at a concert in Abuja on Friday was met with an ecstatic crowd who tried to hop on stage.

A particular fan maneuvered his way onto the stage, held on to the singer’s leg so tight to a point he fell to the ground.

Whiles being thrown off stage by the security, the young man managed to escape from their grips, grabbed Wizkid’s leg again, and dragged him to the floor.

Just as the singer fell, he had his designer outfit shredded but that didn’t stop Wizkid from telling his bouncers to bring the fan back to the stage.

The fan was brought back and Wizkid performed with him on stage.