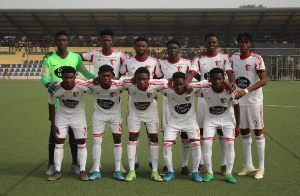 WAFA left it late to secure a hard fought 1-0 win over Medeama at home on Sunday in the Ghana Premier League.

Substitute Sampson Agyapong was put through by Emmanuel ofori Agyemang and he wriggled his way into the box before shooting past the goalkeeper.

The Academy Boys dominated possession and created a lot of scoring chances but were unlucky to find the back of the next.

Justus Torsutsey was put through clear on goal but the striker’s ball was a skied effort in the 34th minute.

Marvin Owusu tried to weave his magic before the break when he made a solo run into the box but his final effort was shot wide.

The early scoring attempt Emmanuel Agyemang attempts at goal but his strike flies over the frame.

Lat on in the second half, Marvin Owusu went on a break after Sarfo had grabbed a corner kick but the striker mis-directed his shot at goal.