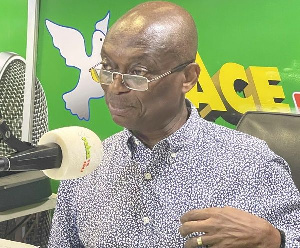 Abdul Malik Kweku Baako Jnr, the Editor-in-Chief of the New Crusading Guide, has appealed to President Nana Addo Dankwa Akufo-Addo to make resources available to office of the Special Prosecutor to ensure the operationalization of the office.

On the Saturday, December 18 edition of the Newsfile show, Kweku Baako struggled to come to terms with the fact that government is yet to compose a board for the office.

He observed that the situation cripples the Special Prosecutor from functioning effectively as there are some issues that need approval from the board.

Kweku Baako reminded President Akufo-Addo that the situation does not reflect well on his administration, hence, the need for him to step in quickly and address it.

“The president and government must wake up and support the special prosecutor. I’m unable to admit that a five-month delay relative to inaugurating a board for that office is acceptable. I’m not going to accept it.”

He disclosed that the Special Prosecutor, Kissi Agyebeng, has had to take on certain duties which fall outside his domain due to the unavailability of personnel.

“We all know the essential value of the functioning of the board. Had the board been in place, there are certain things that the office cannot do including employing personnel. That is why I’m asking for the president and government to wake up.

“After the Martin Amidu saga which was an anti-climax, we ought not to repeat the same scenario and I’m not here to allocate blame but as for the president, he has the ultimate responsibility to ensure that, that creature of law, the office of the Special Prosecutor works and works effectively. At this stage only few of the personnel are being effective. Even salaries structure, there is a challenge there.” He stated.

Baako’s statement comes on the back of Kissi Agyebeng’s assertions that the drive to fight corruption will be fruitless if his office is starved of resources.

Agyebeng, while addressing a gathering at an event to mark the International Anti-Corruption Day in Accra, disclosed that though he has taken steps to operationalize his office, there is the need for the government to provide the needed resources.

“Upon my assumption of office on 5 August 2021 as the second Special Prosecutor of the Republic, I noticed that the OSP had not been operationalized and it was without its own staff and necessary resources. The fight against corruption had, in effect, been thrown in reverse for three (3) years,” he disclosed.

He continued that “I look forward to the provision of adequate funding and the necessary material resources as stipulated in Articles 6 and 36 of the Convention to carry out this most challenging and solemn mandate.

“I cannot help but state that without adequate funding and the provision of the necessary material resources, the good intentions of my staff and I would remain just good intentions with nothing concrete to show for it.”