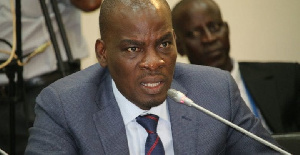 The Minority Leader in Parliament, Haruna Iddrisu, has accused the government of paying lip service to the supposed support for the Vice President following what he has described as the allocation of woefully inadequate budget to his office compared to other Secretariat at the Office of the President.

During a discussion on the 2021 budget estimates in Parliament, the Minority Leader questioned why so much resources have been allocated to the President and the Chief of Staff Secretariat, but only a fraction of that allocation has been made for the Vice President.

“May I respectfully refer you to page 13 of your committee’s report. And Mr Speaker why? Office of the President, 128,711,000; Office of the Chief of Staff 40,400,000 and then Vice President Secretariat 24,000,000. Why? The Vice President’s office deserves better allocation of resources,” Haruna Iddrisu said.

“Why are you starving the Vice President’s Secretariat of resources and you’re having more resources for the office of the chief of staff?”

“Is it because you are not supporting him enough with your hearts as he wants to run for President? That is why you are doing this to him?”