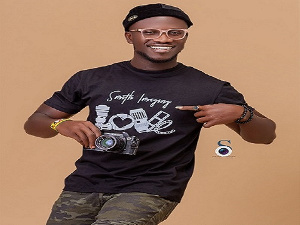 He added that he would love to have a photo session with her and described the opportunity as a ‘time with history’. He disclosed this in an interview in Accra.

His most recent choice of a muse was curious to us when he broke the news. However, his explanation may have drawn some reasoning to his ambition.

“Queen Elizabeth is part of Ghana’s history; and so is the United Kingdom. Ghana being a former British Colony, we have shared some very good memories together”.

“Looking at photos from the Queen’s last visit to Ghana in 1961, I could imagine the euphoria back then, it brings a subtle feeling of joy inside me. Many times, I wish I was present with my lens during those days”, he said.

The highly enthused photographer added that the only way for him to go back in time to relive those glorious historic moments was through the eyes of Queen Elizabeth II. “I can’t even imagine how the feeling would be; taking photos of the Queen in a scheduled photo shoot. Her eyes would be my window to the Gold Coast and her smile would be my hope for the future”, he said.

According to the celebrity photographer, he and his team have been planning a photo exhibition labeled ‘Brighter Than Gold’ for the next year 2022. He said the exhibition would feature exclusive photographs about the beauty and legacy of Ghana.

He hopes that before then, he would have met Queen Elizabeth II as he intends to feature her in the photo album for the Exhibition.

Other personalities that ‘Smith Imaging’ wished he could have captured on camera were Oprah Winfrey, Pop icon Madonna, Barack Obama, and Footballer Samuel Eto and Serena Williams.

Finally, the celebrity photographer acknowledged Ghanaian personalities Abeiku Santana, Charles Antwi Boahen of the KabFam Company, and Ohene Kwame Frimpong of Salt Fm, as people who have fuelled his passion for his profession by way of advice and exemplary lifestyle.