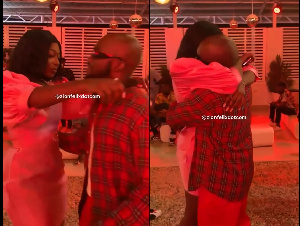 Highlife musician, Mr Drew was spotted given S3fa a big hug at an event they met at.

The reactions of netizens to things celebrities do when they usually come out for public functions can sometimes be mind-boggling.

One netizen who goes by the Instagram name @meleonz has suggested that Highly Spiritual signed musician, Mr Drew, and his colleagues signed on Black Avenue Muzik, S3fa are probably a thing after he saw the way they hugged in public.

The netizen wrote the comment: ‘Drew dey chop low key ????’ under the video that has Mr Drew and S3fa hugging in a very tight manner when they met at HD Plus one-year anniversary concert in Accra.

Apart from this hilarious comment, many others who also reacted have also tried to suggest that Mr. Drew enjoyed the hug more than anything in this world.