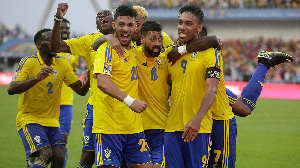 Abameyang celebrating with his Gabon teammates

The Panthers will be camping in Dubai to continue their preparations where the squad will be trimmed to 28 before the start of the tournament.

They will play Uganda in an international friendly on Thursday 30 December 2021 in Abu Dhabi.

The list is headlined by the inclusion of Arsenal striker Pierre-Emerick Aubameyang who will be making his 5th appearance at the tournament having previously played at the 2010, 2012, 2015 and 2017 editions.

Aubameyang is the Panthers skipper and same time all-time top scorer with 29 goals to his credit.

Most-capped Didier Ovono will be missing the African flagship football tournament for the first time since making his maiden appearance in 2010.

Gabon are making a return to the Africa Cup of Nations after missing out in the last edition in Egypt.

Gabon have been drawn in Group C alongside the 1976 winners Morocco, four-time champions Ghana and debutants Comoros Islands.

The Panthers begin their campaign against Comoros at the Stade Ahmadou Ahidjo in Yaoundé on 10 January 2022.

They will then take on Ghana on 14 January 2022 at the same venue before their last group match against Morocco also at the Stade Ahmadou Ahidjo Stadium.