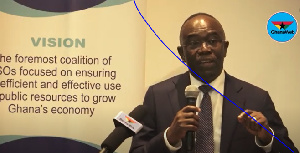 “No institution would have an excuse for non-usage of the Ghana Integrated Financial Management System (GIFMIS) in 2022,” Mr Kwesi Kwaning-Bosompem, Acting Controller and Accountant General, has warned.

He said: “Failure to use GIFMIS to process financial transactions will attract the requisite sanctions.”

He said the Government had invested heavily in GISMIS and assured that it was working assiduously to improve the system and deal with issues of connectivity.

Mr Kwaning-Bosompem was speaking at the 2021 Thanksgiving Service and Festival of Nine Lessons and Carols of the Controller and Accountant-General’s Department on Friday as part of activities marking the Christmas festivities.

GIFMIS is an electronic platform used by the Government to manage commitments made against appropriation and payment.

The Festival of Nine Lessons and Carols brought an imaginative approach to worship and a perfect chronological account of the biblical Christmas story with a glorious selection of carols interspersed by the nine profound lessons.

A unique feature of the service was how management, members of staff and other invited guests were serenaded by soothing carols from the Treasury Choir and live music from the Ghana Armed Forces Band.

The Acting Controller and Accountant General said the Department continued to promote the development of efficient accounting systems in all government departments, adding that, to that end, a review for the update for the chart of accounts had commenced.

“This review is to align the Chart of Account to confront with IPSAS Accrual Basis Financial Reporting; and when completed, it will facilitate the production of financial statements of full accrual basis,” he said.

He said the mission of the department was to protect the public purse in line with government’s efforts to curb corruption, stating that, out of GHS3,290,150.70 reported unearned salaries, GHS3,129,135.58 representing 95 per cent, were recovered within the reporting period.

Mr Kwaning-Bosompem said the Department had not relented in its efforts at ensuring that salaries were paid on time, emphasizing that, throughout the year, it paid monthly salaries and pensions accurately and timely on published dates.

He said the Third Party Referencing System (TPRS) which was launched in May 2021 had been completed and sensitisation of Third Party Institutions and Government employees was also undertaken in July.

Currently, he noted that, the roll out of the upgraded system was ongoing Electronic Salary Payment Voucher (ESPV) System had been upgraded and validators in all regions with the exception of the Greater Accra Region had been trained on the upgraded version.

He indicated that two universities, the Ghana Communication Technology University and the University for Development Studies had been migrated onto the Government of Ghana machanised payroll and they continued to receive their monthly salaries since January when the migration was effected.

Personnel Processing Sections, he said, had also been set up on the campuses of eight public universities, adding that training and migration will be done in 2022.

Reverend Dr Joseph Kofi Antwi, Presbytery Clerk, Ga West Presbytery, in an exaltation, said God required humans to be faithful as faithfulness was one of the moral attributes God shared.

In that regard, he said, public servants and government officials must assure the nation of their transparency and accountability while citizens promised commitment to their civic responsibility by paying right taxes.

Awards were presented to retirees and other long-serving staff of the department for their dedicated service.