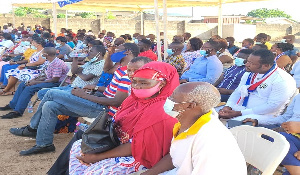 The Planning Committee in charge of the New Patriotic Party’s (NPP) National Delegates’ Congress, slated for December 18-20, at the Heroes Park, Kumasi, has said a COVID-19 vaccination centre will be mounted at the venue.

The idea is to vaccinate and issue cards to those yet to be inoculated, the Committee stated, adding that the move was in line with measures to enhance the safety of the participants.

“Any participant without the vaccination card will not be allowed inside the Heroes Park,” Mr Kwabena Nsenkyire, a Member of the Planning Committee in charge of Operations and Ground Preparations told the Ghana News Agency (GNA).

According to him, the authorities had put in place adequate plans for the strict adherence to the safety protocols in the course of the Conference.

About 6, 000 delegates drawn from all the 275 constituencies are expected to participate in the Conference, designed to review the Party’s Constitution and make amendments for its sustainable growth and development.

The Party says 38 proposals have been tabled for possible amendments to the Constitution, which will be discussed at the programme.

Additionally, the Conference will discuss members’ welfare and take stock of the Party’s activities.

Mr Nsenkyire said security arrangements had been made to enhance the safety and protection of the delegates.

He said the majority of the delegates would be accommodated at the Kwame Nkrumah University of Science and Technology (KNUST).

When the GNA visited the Heroes Park on Friday, December 17, preparations for the Conference had reached the advanced stage with surveillance cameras being installed at key areas of the Park.

Men were also at work mounting various structures and platforms to host the participants for the event.

Meanwhile, the National Road Safety Authority (NRSA) has cautioned participants to plan their journey and avoid driving tired and at high speeds.

“The maximum speed for all highways leading to Kumasi is 80 kilometres per hour.

“Motorists are reminded that the maximum speed for built-up areas is 50 kilometres per hour and 30 kilometres per hour for roads within schools, hospitals, shopping centres, churches, mosques and other related places,” a statement issued by the Authority, and signed by Madam Pearl Adusu Gyasi, Head of Corporate Affairs, noted.

According to the Authority, the Ashanti Region currently leads the country in cases of road traffic crashes reported, injuries and deaths for this year.

Between January and November, this year, 3, 765 cases have been reported in the Region, resulting in 4, 384 injuries and 367 deaths, says the Authority.