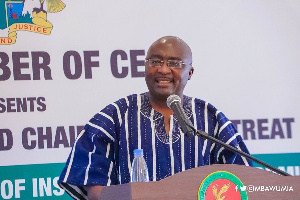 Vice President Mahamudu Bawumia says plans are far advanced for the construction and equipping of 15 Forward Operating Bases (FOB) across the northern frontiers for the Ghana Armed Forces.

This is to enable the military to respond swiftly to any external aggression as atrocities and violent activities of extremists and terrorism organisations increased in parts of the West African sub-region.

Additionally, there will be Forward Logistics Bases in Tamale and Bolga respectively.

Vice President Bawumia announced this in Accra on Friday at the graduation parade of the Short Service Commission and Special Duties Intake 59 held at the Ghana Military Academy.

Vice President Bawumia noted that the government intended to equip the Ghana Navy with offshore patrol vessels and fast patrol boats to counter any piracy and maritime threats on the country’s exclusive economic zone.

The Ghana Airforce, he said, would also receive assaulted aircrafts for their operational exigencies.

“All these investments are to ensure that the Ghana Armed Forces are well equipped and motivated to deliver on its mandate of safeguarding the peace, integrity, and security of the nation and maintaining Ghana’s contribution to international peace and security,” the Vice President emphasised.

A total of 88 cadets comprising 60 males and 28 females were commissioned into the Ghana Armed Forces.

The Intake was made up of first and second degree holders from the various tertiary education institutions with qualifications such as medical officers, logistics, pharmacists, and nurses.

The cadets, as part of the training, were introduced to physical training, drills, tactics, field craft, map reading, and weapon handling.

The six-month course saw the cadets also receiving lessons on military rudiments to assist in transforming them from their civilian state to prepare them ahead of future tasks in their newly acquired profession.

Dr Bawumia added that government had started strategic expansion and modernisation of the Armed Forces in line with the threat analysis and marching base with the acquisition of equipment, logistics, and infrastructure development as well as increasing its manpower base.

The expansion, he said, has already seen the creation and establishment of the Army’s Special Operating Brigade, the Armour Brigade, and two Mechanised Battalions.

He urged the military and other security agencies to remain undaunted in the fight against illegal mining, otherwise known as “galamsey”.

“Our collective vigilance and security consciousness is key in maintaining the peace in the country,” admonished the cadets, and thus, entreated them to uphold discipline, patriotism, and responsiveness to all operational exigencies.

On soldiers’ welfare and accommodation, the Vice President indicated that a 832-unit accommodation ongoing at all the garrisons were at various stages of completion.

The 330-seating capacity two-storey classroom block was nearing completion while the magnificent administration block for the Ghana Military Academy was 95 percent complete, he said.

The cadets who excelled at the training were awarded certificates and plaques, with Junior Cadet Officer Fosu Vivienne emerging as the Overall Best Cadet.