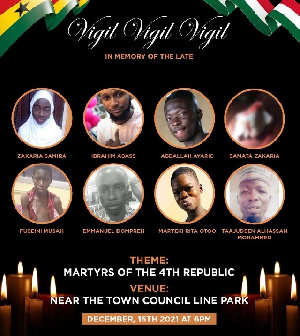 Some Ghanaians who lost their lives during last election

The opposition National Democratic Congress (NDC) has assured the families of some eight Ghanaians who were killed during the 2020 general elections that the killers will be fished out and brought to justice in the party’s next administration.

The biggest opposition party said it will not relent in its quest to find the security officers behind the killings.

A Deputy National Communications Officer of the party, Godwin Ako Gunn, told Accra100.5FM’s mid-day news on Friday, 17 December 2021 the leadership of the NDC held a vigil in honor of the slain voters to mark the first anniversary of their killing.

“We can assure you that the NDC will not sleep until justice is found for the eight slain electorate in the country,” he said.

Mr. Ako Gunn said the NDC, as a political party, considers the eight deceased as martyrs of Ghana’s democracy.

“These innocent people lost their lives because of their civic duties enshrined in the 1992 Constitution during an election. As a party, we will find the killers and prosecute them for justice to prevail,” he promised the deceased families.

He said the NDC will continue to remember the eight and observe the anniversary of their passing every year like how the victims of May 9 are remembered in the country.

Mr. Gunn noted that in the history of the 1992 Constitution dispensation, no single life has been lost to elections except under President Nana Addo Dankwa Akufo-Addo.