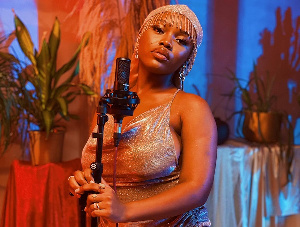 Earlier this year, we witnessed a young woman blossom into a superstar overnight with her hit song, ‘Forever’.

And for those who doubted that Gyakie could last in the music industry, she reminds them that she never forgets the things people have said against her.

During a discussion with Giovani Caleb on Showbiz 360 about those who predicted doom for her career, Gyakie revealed that she was aware of their utterances. And she does not intend to forget anytime soon.

“I have seen a couple. Oh, I have receipts. I always keep them when I see somebody saying something bad about me.

“There’s this thing that I have started doing. I take a screenshot, and I save it. Because you know there’s always something you would get to say in the future.”

Although some may keep receipts to nurture malice against critics, Gyakie disclosed that her intentions were purely to make her a better person. She explained that these receipts make her thrive to do better.

In November, Gyakie dropped four collaborations as she topped Twitter chats with the most liked female musician tweet in 2021. She also became the most-streamed musician in Ghana and most Shazamed song in Nigeria.