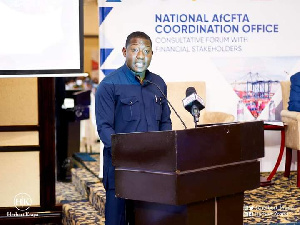 Hon. Herbert Krapa, Deputy Minister for Trade and Industry has said that being the host state of the Africa Continental Free Trade Area (AfCFTA), Ghana was uniquely positioned to become the commercial capital of Africa.

He observed that having the secretariat of “this single duty-free, quota-free market of 1.3 billion people with a combined GDP of 3.4 trillion United States Dollars promises enormous benefits to our continent, especially Ghana.

Hon. Krapa made this remark at a Forum with Financial Institutions on the Implementation of the AfCFTA in Ghana, organised by the National (AfCFTA) Coordination Office, under the Ministry of Trade and Industry in Accra on Thursday.

He mentioned that the increase in intra-Africa trade that the AfCFTA brings with it will address the challenges of small fragmented markets through better harmonisation and coordination.

“It will add value to Africa’s abundant natural resources and also promote economic diversification and industrialisation. It will create jobs for Africa’s youth, ensure knowledge and skills transfer, build stronger value chains, and altogether, improve the standard of living of all our people”, he emphasised.

He noted however that there was the need as a people to create, build, develop and maintain partnership models that are long-lasting, scalable and transformative.

“We must be deliberate in creating linkages between government and the private sector, strategic in providing access to new markets and supply chains, and clear, in providing the right operating environment for our businesses to compete within and beyond our borders”, he added.

According to the Deputy Minister, President Akufo-Addo sees the implementation of the AfCFTA, and the successful participation of Ghanaian businesses, as a critical component of the government’s vision of “A Ghana beyond Aid”.

“Building this expansive export base becomes fundamental, if we want to take full advantage of the African Continental Free Trade Area”, he indicated.

Financial Institutions, he opined, have a critical role to play in the sustainability of these national strategies since Ghana’s ability to harness the benefits of AfCFTA depended largely on an effective and functional financial sector to drive the process of market access for Ghanaian exporters.

On his part, the National AfCFTA Coordinator, Dr. Fareed Arthur revealed that his outfit since its creation has initiated a Market Expansion Project, designed to identify Ghanaian companies with the potential to export to Africa.

He continued that so far over 150 companies with the potential to export have so far been identified, with consultations ongoing to determine their specific needs and find ways of enabling them enter and compete on the African market.

The forum was also attended by the Deputy Minister of Finance, Hon. John Kumah, representatives from the AfCFTA, Bank of Ghana, Ministry of Finance, Ministry of Trade and Industry, financial institutions and the partners of National (AfCFTA) Coordination Office.