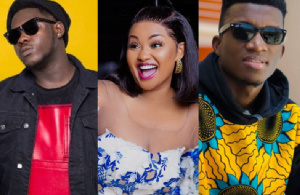 Medikal, Nana Ama McBrown and Kofi Kinaata once had the passion to pursue football

The game of football and entertainment ultimately serve one purpose of bringing excitement to their followers.

The ultimate goal of a footballer and any entertainment personality is to create a platform where his or her followers enjoy consistent happiness.

With their profession drawing them a huge following, footballers and entertainers alike are well celebrated across the world.

Actor Lilwin has courted extra fame recently after taking up professional football with a move to New Edubease.

Whiles Lilwin has ended up as a professional footballer, there are some colleague celebrities who began as footballers but veered off that path along the way.

Unable to play football to the topmost level, Kofi Kinaata has channelled his ‘disappointment’ into grooming new talents with the establishment of TeamMove. He has released monster hit songs and carved a niche for himself as one of the country’s topmost musicians.

Kinaata confessed to beginning his career as a footballer with the right-back position being his preferred.

According to the four-time VGMA Songwriter of the year, some of his colleague footballers grew to play for Sekondi Hasaacas and other top teams in the Sekond-Takoradi area.

The acting queen who is not becoming a TV goddess could have ended up playing for the Black Queens.

Nana Ama McBrown told JoyNews that she was once on the books of Kotoko Ladies and Gapoha Ladies.

She revealed that she played as a winger with the number 7 position being her forte.

The Highlife singer had a dream of playing for boyhood club Chelsea until music came calling.

He is well-known for his connection with Chelsea winger of Ghanaian descent Callum Hudson-Odoi but the two could have played together had King Promise not switched to entertainment.

He was recently pictured playing a football match with Hudson-Odoi when he was in Ghana.

Following his featuring with Beyonce, Dancegod has become a national sensation and a face of dancing in the country.

He recently revealed that he started off his career as a footballer and was focused on becoming a football.

He however abandoned the game due to life’s hardships.

The rapper is credited with a number of hit songs like La hustle, Omo ada and the likes but a successful rap career could have been buried had he pressed on with his football dreams.

Medikal said in Joy FM interview that he played for “Soccer Machine and Soccer Melo” football clubs and was registered.

The left-footed crooner could have been impressing Ghanaians with marauding lines on the left side of Ghana’s attack had he become a footballer.