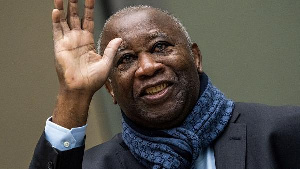 Former Ivorian President Laurent Gbagbo has stated that the West African regional bloc, ECOWAS, should by now have been enforcing a visa-free policy among member states.

Gbagbo avers that unity and cooperation were key factors that were required to better position the bloc to serve citizens.

“When ECOWAS was created I was very happy but later, I have many reasons to be concerned with it. ECOWAS must go further than it is doing now. ECOWAS must act in the interest of uniting people of the subregion.

“I am for the no-visa policy for all citizens travelling within the region. I am for the fight against terrorism not being restricted to specific countries and I am not for the fight being necessarily a military struggle.”

Gbagbo continued that countries directly affected by the scourge needed to more than anything identify the root causes of the menace and more than anything, explore political angles to seeking and end to terrorism.

He spoke to Kwesi Pratt Jnr on Talk Time programme that aired on December 14, 2021 on Accra-based Pan African TV.

In recognition of the utmost importance of movement of people both within and outside the region, the Community signed a Protocol on Free Movement, Right of Residence and Establishment, which has recorded some significant achievements as ECOWAS citizens continue to travel without visas within the region. Legal foundations for the right of residence and establishment have been instituted, and in many cases these rights have been implemented.

There is also the growing use of the ECOWAS travel documents, which can also be considered a success. These travel documents are issued by the 15 member States’ immigration and consular government departments.

Despite the legal framework that was put in place over thirty years ago, ECOWAS citizens are facing some limitations to their rights as enshrined in the free movement Protocol.