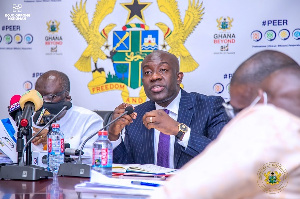 Parliament at an impasse over 2022 budget

Government, telcos in talks for reduction of e-transactions

The move according to the minister is to help government maintain the announced 1.75 percent rate on the proposed electronic transactions levy.

In an interaction with Joy News, Oppong-Nkrumah said, “At the moment, the Telcos are charging about 2 percent so if the government introduces an additional 1.75 percent (e-levy), the cumulative effect is 3.75 percent on the ordinary Ghanaian.”

He added, “Government has been engaging with the Telcos for a reduction…so if the telcos reduce their 2 percent and even if the government stays at 1.75 percent, that means the state is assured of the revenues from the 1.75 percent and the net effect on the Ghanaian will still be low.”

The Information Minister said government is keenly exploring ways to reduce the cumulative effect of the proposed e-levy to ease the burden of taxes on the Ghanaian populace.

Finance Minister, Ken Ofori-Atta when delivering the 2022 budget statement before Parliament in November this year announced a number of policy measures and tax measures.

They include the imposition of a 1.75 percent levy on e-transactions covering mobile money, bank transfers and other payments.

The proposed levy has however been widely criticised by a section of the public with lawmakers calling for a review or scrapping of the proposed tax measure contained in the 2022 budget.