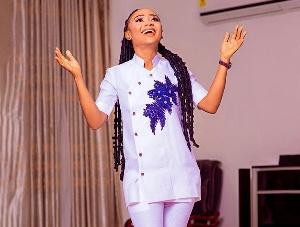 Rosemond Alade Brown sentenced for sharing nude with her son

Actress Rosemond Alade Brown, popularly known as Akuapem Poloo, has been released from the Nsawam Prison.

Her release comes after a fine of GHC12,000 as a replacement for her 90 days custodial sentence.

The fine was paid to the Judicial Service and receipt of payment dated December 16, 2021, was issued to her lawyers led by Andrew Kudzo Vortia.

Her release comes after a three-member panel of the Court of Appeal Wednesday, December 15, reversed the 90 days jail term imposed on her.

This was after the prosecution told the court that, the Republic does not opposed to both the application for bail and the substantive appeal.

Lawyers of the actress led by Andrew Kudzo Vortia argued that the 90-day custodial sentence was harshed and prayed for it to be replaced with a fine.

Akuapem Poloo was on April 16 sentenced to 90 days in jail after she pleaded guilty to three charges.

On December 1, the High Court dismissed her first appeal to have the decision reversed.

In court on Wednesday, December 15, the panel chaired by His Lordship Justice Henry Anthony Kwoffie said, even though the 90 days sentence was right, they are minded to replace it with a fine.

She was, however, given a 1000 penalty unit equivalent to GHC12,000 as a replacement for her 90 days custodial sentence.