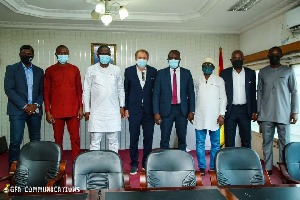 The Minister for Sport, Mustapha Ussif has disclosed that corporate entities in the country have contributed a total of US$2 million to support the senior national team, the Black Stars and other national teams.

The minister who disclosed this in Parliament on Thursday, December 16 said the US$ 2 million was raised under the special presidential fund-raising campaign for the Black Star and other national teams.

He indicated that the amount raised was US$23 million shy of the pledges made by corporate entities during a breakfast meeting with President Akufo-Addo.

He, however, commended corporate entities that had redeemed their pledges and urged others to expedite action owing to the increasing number of upcoming international competitions.

According to him, support from the corporate entities was vital due to a direct relationship between corporate support and the performance of national teams.

This relation, he said, was evident by the performance of the Black Stars when they reached the final and semi-final of the African Cup during the periods they were heavily supported by Gold Field Ghana the Ghana National Petroleum Company.

“I, therefore, wish to appeal for corporate support for our national teams especially in the 2022 African Cup; next year would be a busy year for our national terms with serval major programmes in site; the Afcon in Cameroon, the World Cup in Quarter, the under 20 women’s world in Costa Rica, Under 17 Women’s world cup in India, qualifiers for 2023 Afcon and Commonwealth Games in Birmingham”, he added.

“I entreat all Ghanaians regardless of party and religious affiliation to rally behind our national team as they begin another Afcon journey next month in Cameroon”, he further stated.