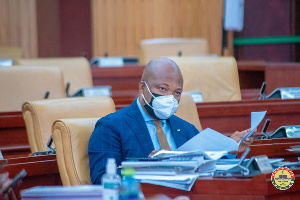 North Tongu MP Samuel Okudzeto Ablakwa has said being a member of some of the relevant committees of parliament, he is aware that buying jets is not a priority of the Ghana Armed Forces.

According to the opposition lawmaker, there is absolutely no justification for the Akufo-Addo administration’s intention to buy some jets including one for the executive arm of government.

Speaking to Iddrisu Awudu on Accra100.5FM’s morning show Ghana Yensom on Wednesday, 15 December 2021, Mr Ablakwa wondered why the president has sidelined the country’s “fit-for-purpose” presidential jet and rather bent on buying a new one amidst the current economic crisis in which, for instance, the allowances of trainee teachers, as well as Nation Builders Corps (NABCo) personnel, have not been paid.

He argued that the current presidential jet, Falcon 900, has a lifespan of 20 years but has done only eleven and, thus, wondered why the president was in a hurry to get a new one.

Mr Ablakwa also shot down claims by Defence Minister Dominic Nitiwul on the floor of parliament on Tuesday, 14 December that the intended purchase of the jet was at the instance of the army.

Ghana’s presidential jet was bought in 2008 by ex-president John Agyekum Kufour’s administration and delivered in 2010 when the late Prof John Evans Atta-Mill was the president, Mr Ablakwa said.