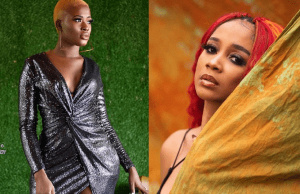 Sister Derby confirms ‘moving on’ after nasty breakup with Medikal

Deborah Vanessa Bonsu, popularly known as ‘Sister Derby’ has recounted how her relationship with Medikal flourished until Fella Makafui stepped in.

One can recall that Sister Derby and Medikal dated for quite a while but broke up towards the near end of 2018.

Medikal shortly after that, confirmed his relationship Fella Makafui who was rumoured to be the reason for his breakup with Sister Derby.

But in a bid to clarify why she sent out a sweet birthday message to her ex (Medikal) sometime in 2020 after they broke up, the ‘Kakalika’ hitmaker insisted their relationship was sweet until it was Fella popped in.

“I didn’t say anything bad in my message to him, just my sweet ex because at the end of the day, our relationship was a sweet and happy one till whoever stepped in,” she stated in an interview with Nkonkonsa.

Asked whether she has moved on, Derby added;

“I moved on a long time ago. I would not have released ‘Kakalika Love’ if I had not moved on. And, in the end, I was the one who ended the relationship. So, what exactly do people mean by I haven’t progressed? Do I appear depressed? Do I appear to be struggling? “Do I have wrinkles?” She quizzed.