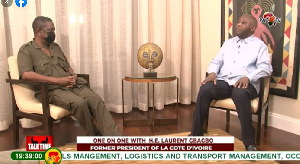 Former Ivorian President Laurent Gbagbo is in Ghana for reasons he has described as “unfortunately sad”.

The 76-year-old who only returned to Ivory Coast this year after acquittal on war crimes and crimes against humanity by the International Criminal Court attended a funeral and paid a condolence visit during his time in Ghana.

The funeral was of Captain Kojo Tsikata, former national security chief under the PNDC government, which was held two weeks ago in Accra.

He also paid a visit to the Rawlingses to extend his condolence over the death of former President Jerry John Rawlings who died in November 2020, at a time he (Gbagbo) was exiled in Europe.

“Unfortunately I am here for a sad reason. It was the death of my dear friend and big brother Captain Kojo Tsikata. I am here in Ghana for his funeral.

“He took very good care of my mother when she was here in Ghana in exile and we have known each other for a long time. I have always called him the old brother of revolutionaries.

“His death leaves an empty space and I had to be here at his funeral. I also took the time to visit the family of the Rawlingses and visited his tomb this morning,” he told Kwesi Pratt Jnr during an interview on Pan African TV on Tuesday, December 14, 2021.

He went further to eulogise Tsikata and his boss Rawlings, who he described as colleagues he ‘fought’ with: “These are people that I shared the struggle with. I wasn’t around when Rawlings died but I was back when Tsikata passed away,” he disclosed.

Tsikata, a former Head of National Security and Foreign Affairs Minister under the Provisional National Defence Council (PNDC) died at the age of 85 on November 20, 2021.

A private burial was held for him on December 9, 2021, after which his mortal remains were cremated according to a report by state-owned Daily Graphic.