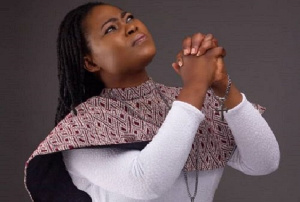 For as long as her issue has been in the media recently, gospel artiste, Joyce Blessing has received some public support.

The award-winning female gospel act has been in the news recently over reports that one of her three children is not her husband’s per a supposed DNA test result.

But according to some women, the recent DNA brouhaha around the artiste and her estranged husband is just one of the temptations that people who serve God go through.

Speaking to some market women in the central business district of Accra on the recent news about the gospel artiste, they had nothing but words of encouragement for her.

If she has vowed to take up the cross of Jesus then she should not be concerned about what people are saying. If she knows she has a clean heart before God, she should forget about it and focus on God as the ultimate judge and not any man,” a trader told Oman Channel.

Another also said “people will always talk about you. So she should forget about it and focus on her work. What at all has not happened or been heard of before in Ghana. We hear stuff all the time, she should not pay any attention and focus on moving forward.

While the female musician was against the allegations of infidelity, another trader said the entire issue could be the work of her detractors. She thus urged her to rather channel her energy into her ministry instead of paying any heed to the allegations.

“People will say anything just to tarnish your image. Matters of truth does not spread like lies.

“It can be from people who are seeking to disgrace her. The gospel ministry comes with challenges. Some people also don’t like to see others prosper and so they do just everything to bring you down once they see you going forward,” she stated.

“I will urge her to be strong. It is a temptation that comes with worshipping God, and so when it happens, she should cast her mind back. She should not allow her emotions to overcome her but rather let God lead her as a Christian,” she added.