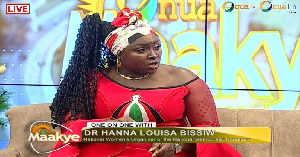 In an interview on a local radio station earlier this month, Bissiw invoked curses on the MP over allegations that she had allowed an impersonator to take her seat when Parliament met to take a crucial decision on the 2022 budget.

Her pronouncements went viral in a short video clip that elicited lots of lashing from persons affiliated with the ruling New Patriotic Party.

Bissiw, herself a former Member of Parliament, said in a media interview on Onua TV/FM on December 15, 2021, that she stood by every statement that she made.

She called out NPP members who are accusing her of going overboard stating that she did not curse the lawmaker as they claim but that she invoked blessings and curses, that if Adwoa-Safo was being truthful, she should be blessed and that the curses should apply if she was indeed impersonated.

“What we have seen shows that she is not the one, we have seen lots of comparisons… amid the back and forth she has come out to say she is the one, maybe it is the truth.

“Orthodox courts in this country, be they Circuit, District, Magistrate, High and Supreme Court, some of us who can’t speak English are unable to appeal to them, some of us also do not have money to even take lawyers.

“And even when you take lawyers, NDC has scored 7–0, 9–0 (a reference to the outcome of some rulings in the 2020 election petition by NDC flagbearer John Dramani Mahama) and so some of us street people, uneducated people …we have the Bible in which there are curses and blessings.”

She stressed that with the just-ended Akwasidae and the central role that libation plays in the lives of many Ghanaians, “it is not to call Antoa Nyamaa but to refer to tradition by speaking of both good and bad.

“So I said, if she was indeed the person in the chamber, then as God says, take the good, I wish you well with all the blessings. But if she was impersonated, then we have laws in this country, our elders don’t read the Bible at the Palace.

“So I combined all the three (Christianity, Islam, traditional religion), that if it wasn’t you (Adwoa Safo), I assemble all curses from the Bible, from Genesis to Revelation and all deities that have surrounded us plus all water bodies and left all with her.

“So it is a blessing and a curse, so I left her with curses depending on the truth. I said it it was you (Adwoa Safo) blessings be your portion, if it wasn’t you, curses. When you (NPP MEMBERS) wake up you cry foul and that you are aggrieved.”

She observed how Adwoa Safo, being the popular MP that she is, will enter the chamber, sit alone and barely confer with any fellow lawmaker plus dash out of the House as soon as proceedings had ended hurriedly abandon the chamber.

“…impersonation is a crime. We want to be hypocrites in this country, when it is NDC, it’s okay but when it is NPP, hands-off,” she added.