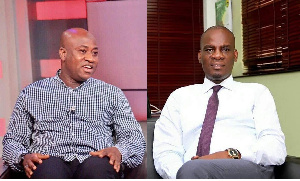 Haruna Iddrisu is a football administrator at Steadfast FC

Minority leader in Parliament, Ibrahim Haruna Iddrisu has shared his childhood memory of how he and fellow parliamentarian Murtala Muhammed used to scale walls to catch a glimpse of football action.

According to the MP, football the 90’s used to be very exciting and supporters often thronged the stadium in their numbers to watch the games.

He noted that growing up in the North, they always fantasized whenever they heard the nicknames of clubs in the domestic league.

“Growing up we all enjoyed hearing ‘wu kum apem a apem b3ba’ but it is lost in our vocabulary. The pride with which we supported local football… and Sekondi Showboys,” Haruna Iddrisu stated on Tuesday.

Haruna Iddrisu recalled that he his fellow parliamentarian were tight buddies who often went to watch matches.

He explained that because fact they could not afford gate tickets, they devised a strategy to evade the security.

He said, “Honorable Murtala at the time was skinny like me, we used to scale the wall just to catch a glimpse of the match because we couldn’t afford to pay.

“So it’s either we hold the bricks of the wall or we push the gateman.”

He noted that people often looked forward to the weekend in anticipation of a football action until, foreign football infiltrated the sporting discipline.