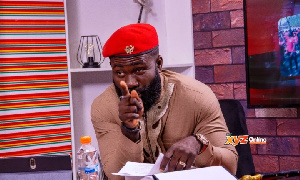 EFL breaks away from #FixTheCoutry

The fallout amongst conveners of the #FixTheCountry campaign and the leadership of the Economic Fighters League continues to reveal deep cracks in the operations of the group.

Founder and leader of the EFL, Ernesto Yeboah, at a press conference, said his group which had been affiliated to the #FixTheCountry campaign is no longer associated with the conveners of the group.

According to him, the #FixTheCountry platform over the period has lost its focus and no longer offers a platform for an honest and credible mobilization of the Ghanaian people in championing national interest and development.

He accused the group’s conveners of being driven by their selfish interests and working for partisan forces behind the scenes.

But responding to the allegations in an interview on JoyNews monitored by GhanaWeb, Okatakyie Afrifa Mensah, one of the conveners of #FixTheCountry, rubbished the claims by Ernesto Yeboah.

According to him, the only cause of the difference between the conveners of the group and the EFL leadership is a result of Ernesto Yeboah’s attempt to position his EFL at the centre of #FixTheCountry operations.

He noted that #FixTheCountry is an amalgamation of various groups and individuals and that there has been a consensus agreement amongst the conveners to avoid projecting a group or an individual as well as turning the pressure group into a political force.

“The only reason why Ernesto Yeboah and his group are behaving the way they are behaving is the fact that at some point when we finished with the Accra demonstration, we had people calling and asking whether we are going to form a political party, a third force, this and that.

“Then we were saying that this is a pressure group, we don’t intend forming any political party. But then again, when we hear the calls coming from the ground to be very massive, then we will consider that. But one thing he (Ernesto Yeboah) intended doing was what they say in Twi that he was using ‘a dirt road to access an asphalt road.’ He was trying to go through the backdoor by positioning his group at the centre of #FixTheCountry,” he explained.

He said an attempt by the lead conveners to get Ernesto Yeboah to understand their position against his objective of projecting EFL using #FixTheCountry is what triggered the EFL leader.

“This is the case when we go for demonstrations… this guy strategically prints his own banners, his own T-Shirts and puts his image on everything that is #FiXTheCountry. Then we complained that when you do this, it will ruffle egos because we have all decided that everybody should leave one way or the other their affiliations and join the common goal.

And he was not doing that. So when we complained vigorously that this is not the right way to go, where we go for demonstrations, and we are trying to mobilize people, behind the scenes, this guy and his people will go and be giving EFL paraphernalia. Not # FixTheCountry’s, saying come and join us, and be taking people’s numbers,” he stated.