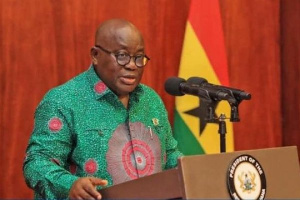 President Nana Akufo- Addo has kicked against the reopening of land borders despite the decrease in infections of the Covid-19 pandemic.

Addressing the nation Wednesday night on measures taken to combat the deadly disease, the President said the time was not right for the country to reopen its land borders as his government is determined to prevent a potential 4th wave of the disease.

The government has been under pressure from residents in border towns to reopen land borders for economic activities, which were curtailed at the height of the pandemic. Some residents of Aflao (Ketu South) led by their Member of Parliament, Dzifa Gomashie, recently embarked on a series of demonstrations to compel the government to reopen the Aflao border to allow economic activity to take place. Similar protests were organized in Elubo in the Western Region.

However, the President insists that the time is just not right to reopen land boarders.

“As you know, the decision to close our borders, which are a source of livelihoods for many, was necessary because we wanted to limit the importation of the virus into the country.

“We are monitoring the level of threat of the disease and ongoing vaccinations in our neighbouring countries, and, as soon as we are satisfied that it is safe to do so, the borders will be open,” Nana Akufo-Addo said.

“Until then, I believe this is not the right time to reopen our land borders, especially as we are determined to prevent a 4th wave, and, as such, they will remain closed until further notice,” the president insisted.

Meanwhile, the president said his government had beefed up its response capability and capacity to deal with the virus should the nation encounter an upsurge in infections.

“Over time, we have expanded our healthcare infrastructure, including oxygen supply and reach, particularly with respect to testing and treatment centres, and the training of health professionals across the country, in the care of severe and critically ill persons,” he said.

The President, however, said the country’s best bet in the fight remains adhering to the enhanced hygiene, social distancing, and mask-wearing protocols, and getting vaccinated.

“Let us choose to live and act responsibly throughout the Christmas festivities, and remember that our actions or inactions will either help to end the pandemic at a much faster rate, or continue to spread the virus in the country. I, on my part, will do everything possible to protect lives and livelihoods, and help return our nation to normalcy. It is possible, and the Government of Nana Addo Dankwa Akufo-Addo is determined to realize this goal as quickly as possible,” he added.