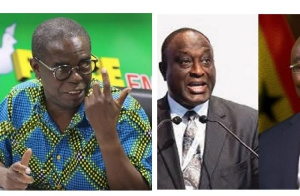 Journalist and Social Commentator, Kwesi Pratt Junior has launched a disguised campaign for Trade Minister, Alan Kyeremateng for the 2024 flagbearership of the NPP, and has also intensified his deep-seated hostility against the Vice President, Dr Mahamudu Bawumia.

Speaking on Metro TV’s Good Morning Ghana on Wednesday, Pratt waded into the upcoming flagbearership race of the NPP, averring that the NPP will choose a candidate who has contested the flagbearership race more than any other person, an apparent reference to Alan Kyeremanteng.

To advance his point and support for the Trade Minister, Pratt went on a history tangent, which has been proven to be inaccurate.

The veteran journalist, who is known as a critic of the NPP, said the NPP has always elected the most experienced presidential candidate in terms of the number of times such a candidate has contested in the past, and made references to Prof. Adu Boahen, John Agyekum Kufuor and Nana Akufo-Addo, to buttress his claim.

However, Kwesi Pratt’s claim, which sought to discredit the chances of Vice President Bawumia, and Agric Minister Dr. Afriyie Akoto, was pointed out by some viewers as false.

In all the names Pratt mentioned as winners of NPP presidential primaries, history, contrary to Pratt’s claims, shows that the winners were not the most experienced contestants in terms of the number of times the candidate has previously contested.

Meanwhile, a number of viewers of the programme sent messages to question Kwesi Pratt’s interest in the upcoming NPP flagbearership programme.

For a man known to be publicly sympathetic towards the opposition NDC, some of the viewers wondered why Pratt is rooting for a particular candidate, and has, on many occasions, showed his dislike for particularly the Vice President.

Recently on his Pan African TV, Pratt again attacked the candidacy of Dr Mahamudu Bawumia and urged the Vice President to withdraw from the race and allow others to contest.

Many have been wondering what is the interest of Kwesi Pratt in pushing for the NPP to elect a particular candidate, and vehemently campaigning against Vice President Bawumia.