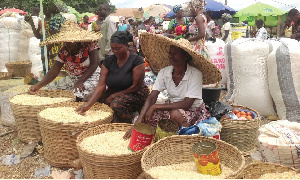 Agric director for the Fanteakwa South District, Mr. Wisdom Kuma, has said that Ghanaians should expect an increase in maize price next year.

Speaking on ‘Our Land Our Future’ program on Radio 1, he said prices of major staple foods such as maize will increase.

According to him, climate change has really affected the production of maize and rice by farmers this year.

“The unpredicted weather has affected the production of rice and maize and we should expect an increase in the price of maize especially in Eastern Region,” he said.

He added that maize farmers are forced to increased their prices due to the rising cost of inputs and climate change.

“The development will stimulate the increases in the prices of various kinds of foods prepared with maize,” he further noted.

Some traders in Anyinam said, the price of maize had seen a steady rise and attributed the recent increases to the marginal hike in transportation fares.