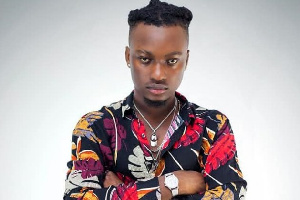 Ghanaian Afro-pop singer, Randy Amoah popularly known as ‘Yaw Berk’ has served a word of caution to budding music talents to be wary of any document they append their signatures to.

Yaw Berk in an interview with Daryl Tetteh on his MultiCDB YouTube channel urged young musicians to engage the services of experts and get their advice before signing contracts.

He noted that failure to do so could land the said artiste in a situation that could cripple his or her development.

“Don’t hastily jump into a contract. Give it to people who can analyse so that they can take time and advice you before you get yourself into any kind of banter,” he said.

Yaw Berk also disclosed that he is currently involved in a deal with New Accra Communications.

He likened the label to the Ground Up Music label that is credited with the discovery of Kwesi Arthur and Quamina MP.

“I working with New Accra Communications. They are like Ground Up Music and we have that force. There are a lot of artiste on board too. Very soon you guys will see what I’m on.”

One can recall that Yaw Berk who was formerly signed under Kaywa’s High Spiritual label exited under controversial circumstances.

The artiste fell out with the renowned producer but it is believed that the two have trashed out issues.