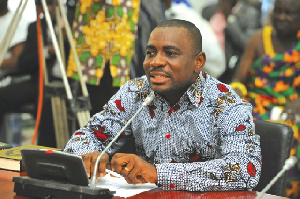 Chairman for Roads and Transport Committee in parliament, Kennedy Osei-Nyarko

Parliament has approved an amount of €150 million for design and build contract agreement between government and Messrs QGMI Construcciones E Intraestructuras Globales (QGMI) and Rango Construction Company Limited (RCCL) for the design and construction of the Peduase-Mamfe-Koforidua Scenic route.

The objective of the project is to reduce travel time and vehicle operating costs in the Peduase-Mamfe-Koforidua road and the road network in its immediate environs.

The project also seeks to improve accessibility and ease of movement for pedestrians and non-motorised vehicle users, especially those with disabilities and improve the capacity of the drainage system along the stretch.

Mr Kennedy Osei-Nyarko, Chairman for Roads and Transport Committee, moving the motion for the House to adopt the report of the Committee on Roads and Transport stated that the duration of work on the Peduase-Mamfe-Koforidua scenic route is 30 months from the commencement date.

Mr Osei-Nyarko also stated that the scope of the project involved the dualization of Mamfe-Koforidua road, which would include the construction of a dual carriage road with 31km length and ancillary works.

He said the project would involve the rehabilitation and upgrading of the existing main road with 51km length and 55km of selected community roads.

He said the road works would consist of survey and investigation, designing of the road alignment and geometry, pavements, drainage, bridges and culverts, site investigation and tests, road markings and signage, as well as associated road, works in line with the Ghana Highway Authority Pavement Design Manual and Standard Specification for Road and Bridgeworks of the Ministry of Roads and Highways.

Mr Governs Kwame Agbodza, Ranking Member on Roads and Transport Committee, in seconding the motion, expressed concern about the poor conditions of many of the country’s trunk roads and urged the government to upgrade these roads, including Accra to Kumasi, Takoradi and Ho, among others.

He said even though the government was doing asphaltic overlay in some cities such as Accra and Kumasi, the journey to some of the regional capitals called for the upgrade of the roads in those places.

Mr Agbodza also urged the House to request for Value-For-Money (VFM) audit on contract agreements that were brought to the legislature to ensure transparency and accountability in the execution of the project.