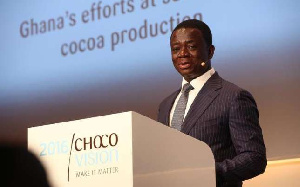 Aside, filing another motion asking Justice Clemence Jackson Honyenuga to recuse himself for allegedly exhibiting “bias tendencies and open hostility towards” him, he wants a fresh judge to hear his case.

To this end, proceedings on Monday, December 13, were suspended to await the directives from the CJ.

Dr. Opuni, per the petition to the Chief Justice, Kwesi Anin-Yeboah wants a new Judge to hear the motion pending at the High Court.

The application has been fixed for Thursday, December 16, 2021.

Justice Honyenuga, a Justice of the Supreme Court, who is sitting with additional responsibility as a High Court judge has also been accused of giving preferential treatment to the Attorney General.

The motion to recuse himself stated that, “The conduct of His Lordship Justice Clemence Honyenuga since I opened my defense is one of open hostility towards me, his acts and conduct is such that justice cannot be said to be seen to be done,” the affidavit in support of the motion file on Friday, December 10, 2021, stated.

In court on Tuesday, December 13, Justice Clemence Honyenuga, a Justice of the Supreme Court adjourned the trial pending the outcome of the CJ.

This was after the Judge was notified of a motion filed by Dr. Opuni through his Counsel, Mr. Samuel Codjoe for the judge to recuse himself and hand over the case to another Judge.

When the case was called, the Judge told the parties in the trial that, there was a motion for him to recuse himself from the trial and a petition sent to the Chief Justice.

But, Mrs. Yvonne Attakora-Obuobisa, Director of Public Prosecution (DPP), said they were not served.

The DPP contended that Counsel could have fixed the hearing of the motion for (Monday, December 13, 2021), knowing very well there was a Court sitting, especially so, because there was such a precedent in the same case at the Supreme Court.

She said the motion should not be made to operate as a stay till it was determined, adding that the dates agreed on and set by the Court must be respected, hence the trial must continue.

Counsel Codjoe told the Court, that the motion was filed on Friday, December 10, 2021, and on Monday, December 13, 2021, they served a copy of the petition and that of the motion on the Attorney General’s Department, where they acknowledge receipt.

He said considering what the DPP said, she was urging the Counsel not to engage in an Act, which was strictly prohibited by the Court deciding on cases, which by Article 129 (3) of the Constitution was binding on the Court.

He said the DPP’s allegation on him fixing dates in cases was unacceptable and unconstitutional rather it was the Registrar, who fixed dates.

The Judge after listening to both parties adjourned the trial decided to suspend the substantive matter fixed for Monday, December 13, 2021, and adjourned same to December 16, 2021, awaiting the Chief Justice decision or directive.

Dr. Opuni, the first accused person has opened his defense with the former Director of Finance at COCOBOD as the first of his eight witnesses.

Dr. Opuni, Seidu Agongo, and Agricult Ghana Limited are standing trial for 27 charges for allegedly causing financial loss to the state, defrauding by pretenses, conspiracy to commit a crime, abetment of crime, money lingering, corruption by a public officer, and contravention of the PPA Act.

Together, they are accused of causing a financial loss of over GH¢217 million to the state through the sale and purchase of the controversial Lithovit Liquid Fertilizer, which according to the prosecution, was never tested.

They have all pleaded not guilty to the charges and have been granted bail.