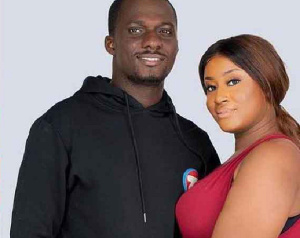 Minalyn and Erica have a kid each, with Zionfelix being the father

A new video making rounds on the internet captures Zionfelix with his Italian-based baby-mama, Erica Kyem, hanging out at an unidentified location.

The two were seen having a serious conversation while Zionfelix handed over their baby to Erica after holding him for a while.

In the video first shared by popular Ghanaian blog, ‘Thosecalledcelebs’, Zionfelix was rocking a white two-pieced kaftan while Erica was seen in a turquoise blue gown with shades of brown.

They were having a conversation even as Zion walked off to his car parked right beside them.

Reports say Erica is in Ghana for the first time after she delivered her baby boy in Italy.

One can recall that Erica welcomed a baby boy around the same time Zionfelix’s well-known girlfriend, Minalyn, also birthed a baby girl.

Following the events which earlier unfolded on social media, scores of individuals have condemned the blogger for impregnating two women out of wedlock and subjecting them to mockery.

But Zionfelix seems to be playing the baby daddy role to the best of his ability by checking up on both baby mamas and most definitely providing for their needs.