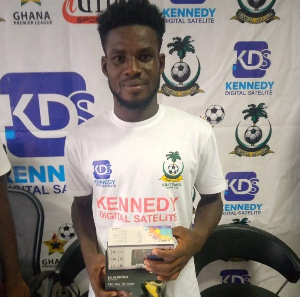 King Faisal defender Samuel Kusi was named Man of the Match in their 1-0 win over Elmina Sharks on Sunday in the Ghana Premier League.

The left back played a pivotal role in the victory which sent them to the top of the table.

Striker Ibrahim Osman scored the only goal of the match at the Baba Yara stadium.

King Faisal had another glorious opportunity to score after Enoch Morrison was put through on goal by Atta Kusi but his header missed target narrowly.

The home team kept on asking questions and this time it was Wadudu Yakubu whose low shot in the box was confidently grabbed by Lord Bawa, the Elmina Sharks.

After 27 minutes, Osman opened the scoring when he capitalized on a defensive error to fire home.

Three minutes to end of the match Justice Ato Mensah delivered a shot but Frank Boateng produced a great save to keep the scoreline same.

Minutes later there was an injury scare after Boateng collided with Enock Agbeyno.

Ato Mensah went in with a free header but his effort went wide as Sharks continued bossing the possession.

Three minutes from time, Elmina Sharks had the ball at the back of the net but the goal called back for offside.

Faisal goalkeeper Boateng went down and had to be treated on the pitch.