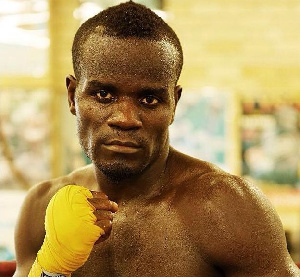 Ghana records no world title in 2021

Former IBF Welterweight Champion Joshua Clottey has advised Richard Commey to move up in weights in order to realize his dreams of becoming a two-time champion.

Commey lost his fight which could have landed him a world title shot over the weekend to Ukraine’s Vasiliy Lomachenko in their non-title fight.

Reacting to Commey’s defeat over the weekend, Joshua Clottey blamed the 33-years-old refusal to move up in weights as the reason for his lose.

According to him, Commey lost his fight at the Maddison square due to the fact he lost weight just to make for the fight.

According to him, Commey must move to the 140 weight category if he wants to dominate his division.

A move up in weight will see Commey compete in the welterweight division which is dominated by the likes Terence Crawford, Errol Spence Jr., Yordenis Ugás and others.