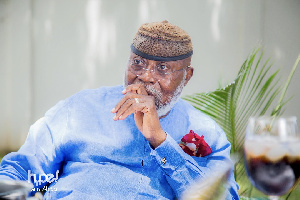 A founding father of the governing New Patriotic Party (NPP), Dr. Nyaho Nyaho-Tamakloe, has eulogized his late uncle, Captain Kojo Tsikata, as a strategist who had a tremendous ability to focus.

According to Dr. Nyaho-Tamakloe, he is related to the late Tsikata, who was buried last week Thursday, through maternal lineage.

“My mother was a Tsikata and a brother of the late Kojo Tsikata was a de facto member of the defunct PNDC, which gave birth to the main opposition National Democratic Congress (NDC)”, the ex-military and retired medical doctor told Iddrisu Awudu on Accra100.5FM’s morning show Ghana Yensom in an interview aired on Monday, 13 December 2021.

He said the late Kojo Tiskata played various roles in the birth of the PNDC and the 1992 Fourth Republican dispensation.

Dr. Nyaho-Tamakloe, who is also a board member of the football club Accra Hearts of Oak explained that the late Tsikata, who was also known as ‘Gbagblaza’ -meaning cockroach in the Ewe language, joined the military when he left Achimota School and rose through the ranks to become a captain.

He added that the late Tsikata was a reserved but very strategic person.

Dr. Nyaho-Tamakloe said there were times when Captain Tsiktata was in the country without anybody knowing his whereabouts.

He said the late Tsikata was a very private person, thus, his desire to be given a private burial per his will.

“So, his burial was organized under strict invitation”, Dr. Nyaho-Tamakloe said, explaining that one needed an invitation to attend the funeral a departure from what Ghanaians are used to.

He noted that the private funeral was attended by President Nana Addo Dankwa Akufo-Addo and former President John Dramani Mahama.