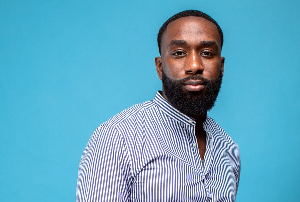 Fresh off releasing his debut album “After God’s Own Heart”, the charismatic Canada-based gospel singer gives fans an 8-minute visual taste of two songs off his live soundscape.

Now available on his official YouTube channel, the new video for ‘Songs of Victory/Aman Mma’ is pretty straightforward and a performance of two songs, thus its length.

It shows Joshua Dwomoh take center stage as he ushers the believers present into a mood of praise with his medley of soul-stirring songs which have an afro twist to them.

There are also shots of the ecstatic gathering while Joshua Dwomoh and his band recreate a buzz distinct of live performances with uncanny precision.

It is worth noting the video was captured during the recording of the Ghanaian Gospel singer’s debut live album “After God’s Own Heart” and is intended to draw viewers into the joyous spiritual experience expressed in that exact moment of praise.

All in all, Joshua Dwomoh’s puts an engaging show that’s uplifting and easy to fall in love with.