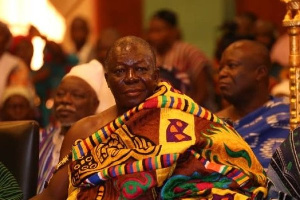 Otumfuo Osei Tutu II, Asantehene, has advised politicians to at all times be tolerant of divergent views and embrace compromises to deepen democratic governance in the country.

“As national and international problems become more complex, nations are finding that the smart and prudent way is to seek the convergence of different points of view.

“Thus, across many jurisdictions today, one word has come to symbolise the lifeblood and the soul of democracy. It is called compromise,” the Asantehene observed.

According to the king, “when the art of governance becomes overly rigid and inflexible, it invites the search for an irresistible force and an unorthodox path to resistance.”

Democracy, he said, was not a static object, citing how the British had avoided giving themselves a written constitution, because, “the absence obviously, gives British democracy the latitude and flexibility to float with the tide.”

Otumfuo Osei Tutu, speaking at the launch of the Asantehene’s ‘Commemorative Gold Coins’, at the Manhyia Palace, Kumasi, reminded the people that democracy was a work in progress.

“The American Constitution, held as the gold standard of democracy, has been sustained by its scope for amendments to suit changing circumstances.

“In a sense, adaptability has been its source of sustenance,” he stated.

The commemorative gold coins, minted by the Gold Coast Refinery and approved by the Bank of Ghana, are not for legal transactions.

The 24-carat coin is in honour of Otumfuo Osei Tutu II for his sterling leadership, having played an invaluable role in advancing Ghana’s democracy under the Fourth Republican Constitution.

The face of the gold coin bears the image of the Asantehene, with the ‘Adinkra’ symbols on the left side and ‘Mpatapo’ on the right, which symbolizes peace, harmony, and reconciliation.

Proceeds from the sale of the coins would be channeled towards the establishment of a Cultural Resort Centre, to promote the customary resolution of conflicts.

Dr. Mahammudu Bawumia, the Vice-President, who graced the occasion, said the Asantehene represented an icon of peace.

He said the king’s wise counseling and sterling leadership had helped to restore peace to Dagbon after a protracted chieftaincy dispute.

He lauded the Asantehene for the fatherly role he had played to deepen democratic governance under the Fourth Republican Constitution.

The programme, supported by the PMMC, had in attendance Ministers of State, Members of the Diplomatic Corps, Members of Parliament, Captains of Industry, and a cross-section of the society.