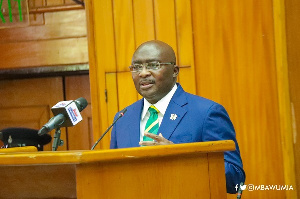 Mr Jantuah believes that since the e-levy hinges on digitalisation, it will be prudent to hear from the Vice President who is championing the digitalisation agenda.

Mr Jantuah was speaking on the Key Points on TV3/3FM on Saturday December 11 with host Dzifa Bampoh.

“Why is the Vice president silent?” he quizzed.

He further noted that whether or not the e-levy proposal is accepted, the government still wins.

“Whether they put e-levy on it or they don’t, government wins. So, they put a levy on MoMo, Ghanaians decide we are not going to do MoMo. Two things, they might either keep their money under their bed or they will revert to the banks. If they revert to the banks, who borrows from the banks? Who do the banks want or are likely to loan money to?

“But I feel that if it so happened that initially before they start to think about e-levy they had consultations with civil society , stakeholders and all maybe it would have been more acceptable than it is now.”

Meanwhile, Bongo Member of Parliament, Edward Bawa has revealed that negotiations on the introduction of the e-levy have collapsed.

He made the revelation on the Key Points on TV3/3FM with host Dzifa Bampoh on Saturday December 11.

“Negotiations have collapsed,” he said.

Referring to an article published by the pro-NPP Statesman newspaper which criticised Mahama’s introduction of taxes, Mr Bawa said Ghanaians thought the Akufo-Addo administration was not going to levy the people.

But reacting to his comment, Dr Kabiru Mahama, Economic Policy Analyst at the Office of the Vice President disagreed with the comments that negotiations have collapsed.

“From the government’s view, negotiations haven’t collapsed,” he said on the same show.

“It is quite unfortunate to state that consultations have collapsed,” he said.

Finance Minister Ken Ofori-Atta had said at a press conference earlier that consultation were ongoing on the proposal.

He said “On the matter of the E-levy, having regard to its serious fiscal implications, we will continue our consultations with the Minority Caucus in Parliament and other relevant stakeholders, with a view to achieving consensus and reverting to the House in the shortest possible time.

“We are determined to enhance domestic revenue mobilisation, the presence of our proposal on the E-Levy is to widen the tax net and generate the required revenue to support entrepreneurship, youth employment to build our infrastructure especially roads and reduce our debts,” he said.

“Let me emphasise that the E-levy represents our greatest opportunity to in the medium-term widen the tax base and meet the tax to GDP ratio of 20% as pertains among our peers.”

Meanwhile, the e-levy was absent from the business statement for next week after Deputy Majority Speaker did not mention it in the House on Friday December 10.