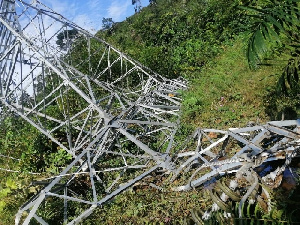 The Ghana Grid Company Limited has announced the completion of power restoration works to the Ashanti Region.

The capital, Kumasi, has been experiencing an interrupted power supply for the past few weeks following the collapse of two towers on the 330kV Aboadze-Anwomaso Transmission Line at Bogoso.

The line was restored on 7 December 2021, according to the Northern Sector Director for GRIDCo, Vincent Boakye.

“We continue to apologise for the inconvenience and because these issues have been resolved, we are expecting that the outages we had in the evenings in Kumasi and greater Kumasi will be no more.”

“God willing, we will have this situation all through Christmas and next year,” he told journalists.

GRIDCo announced on 10 November 2021 that the collapse of a communication mast on its 330Kv Aboadze-Kumasi Transmission Line at Bogoso in the Western Region resulted in the collapse of two adjacent towers.

The incident occurred on Tuesday, 9 November 2021.

A statement issued by GRIDCo, at the time, said: “This has affected the national power system and may result in some load shedding management.”

It noted, however, that it is “working around the clock to replace the fallen towers within the shortest possible time.”

The statement added: “GRIDCo is committed to maintaining a stable network for reliable and efficient power delivery.”