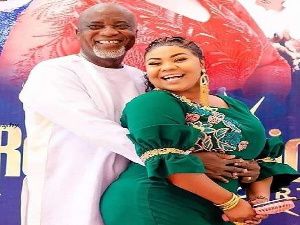 I correct my husband when he is wrong, Empress Gifty

My husband listens when I advise him, Empress Gifty

Gospel musician, Empress Gifty, wife of the outspoken member of the ruling New Patriotic Party, Hopeson Adorye, has revealed that she confronts her husband when he sometimes goes overboard with his comments on social media.

Mr Adorye, who stood on the ticket of the NPP as the parliamentary candidate for Kpone-Katamanso, lost the December 7 parliamentary elections in 2020.

He has been tagged as a ‘controversial’ man by persons who see some of his statements as harsh and insulting.

It would be recalled that Hopeson Adorye was engaged in banter with Twene Jonas, a Ghanaian social media commentator based in the United States of America.

The husband of the award-winning singer vowed to ensure that Jonas was deported to Ghana over what many describe as his continuous attacks on the NPP and the Nana Addo government.

But reacting to her husband’s stance and utterances in the media, Gifty, in an interview monitored by GhanaWeb on Hitz103.9FM, intimated that she can not change her husband but instead advises him when he goes wrong.

“My husband is a hard man, he is used to it…I can’t change him because he is a grown man but I make sure I speak to him as a wife. I make sure I talk to him. I say to him, Daddy, I think this part wouldn’t help us, when you do this it will help us and he listens. When I tell him don’t respond, he wouldn’t and that’s him.”

Also reacting to his online fight with Twene Jonas, Empress Gifty stated that her husband informed her after he made the viral clip claiming that authorities in the US were after the social media commentator.

Empress Gifty explained: “He called me, after the video, he called me asking if I had seen his video. All I said was that he should be prepared for the response and within 5 minutes, he was all over the place. So, I called him, and he asked if I was bothered and I said no. He said he was trending …when he came back, I sat him down, where he was right I told him, where he was wrong, I told him and then we moved on.”

Hopeson Adorye has on several instances rained insults on Instagram users who disagree with some of his posts and also dragged his critics.

A clear example was when he shared photos of a woman believed to be the face behind Thosecalledcelebs, a popular blog on Instagram.

Mr Adorye called her a prostitute for alleging that he was cheating on his wife, Empress Gifty.