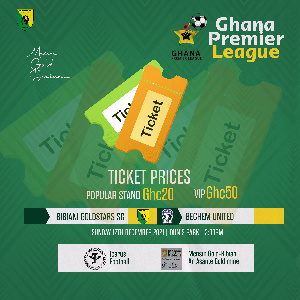 The league’s newcomers have fared quite well but still, need a massive improvement if they are to keep hold of their top-flight status at the end of the 2021/2022 season.

In the team’s last outing, they lost 2-1 to Dreams FC in an exciting contest. With the result seeing the team drop to 10th on the league table, there is an urgent need for the side from Bibiani to record a win this weekend to bounce back.

For the opponent Bechem United, the side only picked a point from their last outing and remains 5th on the Ghana Premier League table.

Despite not amongst the favourites for the title, the Hunters have shown potential and look poised to battle for a place in the top four of the table at least before the end of the first round of the season.

The game promises to be an exciting one and will be the first between Bibiani Gold Stars and Bechem United in the Ghana Premier League.