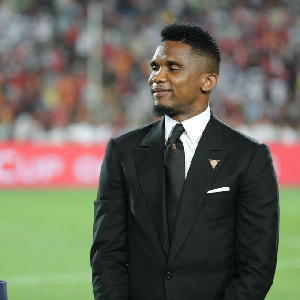 African great Samuel Eto’o has implied that he will raise the standard of Cameroon football to the level no one has ‘ever seen before’.

Eto’o’s comment was in reaction to winning the presidential seat of the Cameroon FA on December 11, 2021.

He emerged victorious after 75 delegates cast their votes on Saturday to elect a new leader for the next four years.

The ex-Barcelona star amassed pulled 43 votes, 12 more than his main rival Mbombo Njoya to win the seat as the FA chief.

The four-time African Footballer of the Year took to his social media to thank delegating for bestowing on him the right to lead FECAFOOT.

In the message, he wrote that the votes show the Cameroon football family wants to reach a greater height.

“PRESIDENT OF FECAFOOT I’ll be remembering today as one of the proudest moments of my life. I’m deeply grateful to be elected as the new president of Fecafoot. Every single vote represents the energy and ambition of our football family to take our beloved sport to a level we’ve never seen before.” Let’s get to work” he wrote on his Facebook wall

What the win means for Samuel Eto’o. All the emotions!

The four-time African Footballer of the Year has promised a wide range of reforms.