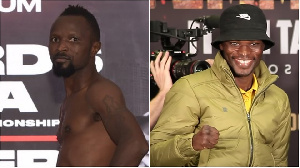 Two Ghanaian boxers, Richard Commey and Joseph Agbeko, will be in action Saturday evening as they battle it out in two boxing bouts.

The fight is a final eliminator which could land the Jamestown-born a second world title shot in the Lightweight division if he comes out victorious.

Both Lomachenko and Commey lost their lightweight titles to Teofimo Lopez and are hoping to regain their supremacy in the division.

Lomachenko has 11 knockouts in 15 victories and has a major threat to ending Commey’s hopes of becoming a two-time world champion.

Commey is undefeated in his last two bouts and has a record of 27 knockouts in 30 victories.

Ghana, which used to be a strong force in boxing, cannot brag of a reigning world champion in the last 2 years, but that script could change tonight if Joseph Agbeko wins his fight in Dubai.

Agbeko comes up against British boxer, Paul Butler for the WBO Bantamweight world title fight at the Coca Cola Arena in Dubai.

Paul Butler who is making his first defense to the title was billed to fight Philippine boxer, John Riel Casimero, but a late injury means Casimero had to be substituted for Agbeko.

Agbeko who has continuously desired a 3rd world title wants to retire from the sport on a high note.

Richard Commey was Ghana’s last world champion in 2019, prior to him Isaac Dogboe also won a world title in 2018.