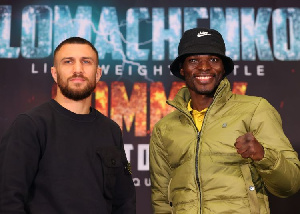 Win this and fame, fortune and glory will follow plus the chance to fight the best fighters in the Lightweight division for even more fame, fortune and glory. Lose this and life as one of the best division fighters in the world vanishes in an instant. This is the fate that lays ahead of Richard Commey and by some stretch his opponent in Sunday’s bout, Vasiliy Lomachenko.

In the cutthroat world of boxing, Commey should be considered a lucky one having had two big opportunities to fight for world titles but come up short only to get the chance to fight for a third one by going up against the highest-profile of all the fighters in the division this weekend. Bar Ryan Garcia’s bout of depression and subsequent surgery to fix a wrist injury, all the top lightweights have been busy in the latter part of Year 2021. Gervonta Davis, Devin Haney, Teofimo Lopez and Lomachenko got scheduled to see out bouts in the space of a month.

The upset theory had a major shock loss bound to happen in one of the fights involving the aforementioned names. Haney beat Jojo Diaz and Davis saw off Isaac Cruz with both winners looking not too convincing but at least they won and that isn’t what the undisputed champion Lopez got at the end of his bruising bout with George Kambossos. The now-former undisputed champion lost a split decision to prove the upset theory right but what that means is the heavily favoured Lomachenko wins his fight against Ghana’s Commey on Sunday.

Judging by his flat performance against Teofimo Lopez and his competitive but first high-profile loss against Robert Easter, it is fair to rank Commey as the underdog. Commey laughed when the two stared down each other for the cameras and his fighting style profile screams of a man who should have the last laugh. Lomachenko has lost twice in 17 fights as a pro and both losses came at the hands of power punchers; Commey is a power puncher. Oblitey happens to be on friendly terms with the last man to beat Lomachenko; Teofimo Lopez. Perhaps he could request for some tips to beat Lomachenko that way as the New Yorker did in stunning fashion to shock a world shocked by COVID 19 in 2020.

Commey doesn’t have a significant height advantage over Lomachenko with the latter checking in at 5 foot 7 inches and the former checking in at 5 foot 8 inches. On the other hand, there is a big advantage for Commey in the reach category as the Azonto Boxer has a reach of 173 centimeters while Ukrainian Lomachenko has a 170-centimeter reach. That reach discrepancy is sure to come in handy since boxing from the outside is Commey’s best bet to land hard punches clean on Lomachenko.

The Matrix’s footwork is second to none and he would utilize it to close the distance on Commey and score points by unleashing his tremendous hand speed and queer angles. Oblitey should stay behind a stiff jab especially to the body to keep Lomachenko at bay and throw the overhand right to stop him in his tracks when advancing. Commey ought to lean on his footwork to carve out angles of escape whenever Lomachenko attempts to corner him. Again, the Two Time Olympic Gold Medal winner is most dangerous when fighting in close quarters and the corners and the ropes aren’t Commey’s best friends in this fight.

Like Terrence Crawford-another boxer who easily switches stances from orthodox to southpaw-Lomachenko likes to warm himself into a matchup particularly against quality opponents. Both fighters use this period earlier in fights to process information that isn’t captured on tape played over and over again in training camp. After a couple of rounds gathering and deciphering the information, they launch their attack and the routine played out in the bout against Teofimo Lopez.

Shawn Porter led the earlier rounds in his fight against Crawford but Porter starting losing ground from the fifth round till he eventually got stopped albeit controversially in the 10th round. Teofimo was aggressive from the start and scored major points off landing a handful of big shots to the body and overall activity in the ring. Lomachenko came into his own starting off in the sixth round and proceeded to dominate the next three rounds; the 11th round passed as a draw and Lopez rallied hard in the 12th round to pinch the win.

Commey would have to use the same tactic since it has worked not once but twice judging by Orlando Salido’s post-fight comments as the first man to beat Lomachenko in a professional setting. “To beat Lomachenko you really need to press him, take the fight to him and pound the body” he said in the aftermath of scoring the upset win in 2014.

Should Commey win this fight, he vaults himself into the conversation as the biggest name next in line for a shot at Kambossos’ undisputed title reign after Devin Haney plus a sizable market boost to negotiate for more dollars on his next fight. The Matrix is beatable; so long as Commey sticks to a game plan infused with smart boxing and connecting on heavy punches, he should beat Lomachenko.