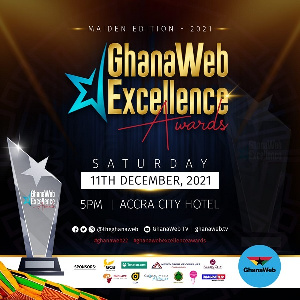 The maiden edition of the GhanaWeb Excellence Awards is taking place tonight December 11 2021 at the Accra City Hotel.

After several months of various stages of implementing the first-ever website-initiated people choice awards in Ghana, the stage is set to hold the climax ceremony that will see a total of over 20 personalities awarded.

The awards ceremony is being held in honour of Ghanaians who have worked tirelessly in various fields of national development and made significant impact to society.

The GhanaWeb Excellence Awards is the first-ever audience-powered award scheme organised by an online media platform.

The people’s choice award scheme is aimed at acknowledging personalities, groups, and organisations who have contributed immensely to the development of Ghana.

On July 1, 2021, GhanaWeb launched the maiden edition of the annual GhanaWeb Excellence Awards. The event saw the unveiling of eighteen (18) categories, plaques, and prizes for prospective winners.

The categories include the GhanaWeb Humanitarian Award, which will recognize a Ghanaian who has been exemplary in promoting human welfare by helping the needy and underprivileged people in Ghana without discrimination.

Watch the live event below: