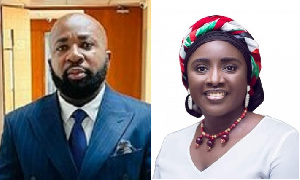 Charles Nii Teiko Tagoe, Executive Assistant & Head of Social Media at the Office of the President, has reacted to a viral video in which Louisa Hannah Bissiw is seen raining conditional curses on Member of Parliament for Dome-Kwabenya, Sarah Adwoa Safo.

Bissiw’s curses are in respect of an impersonation allegation against the lawmaker after Minority MPs insisted that a lady purporting to be her attended the Parliamentary sitting of November 30, where a rejection of the 2022 budget was revised and subsequently approved.

The Minority led by Chief Whip, Mohammed-Mubarak Muntaka and North Tongu MP, Samuel Okudzeto Ablakwa has vowed to uncover the truth behind the said incident.

Even before they come out with their findings, Hannah Bissiw in an interview with Accra-based radio station heaps curses on the lawmaker stating that may she be impacted negatively if indeed she allowed her seat to be taken by a non-MP for purposes of winning a political victory.

Bissiw added that if indeed Adwoa Safo claims to have been the person in the House on November 30, then all the curses should escape her.

Sarah Adwoa Safo, who until that day, had not shown up in parliament since this meeting of the 8th parliament started sitting, suddenly appeared on the floor but her arrival was shrouded in a lot of doubts, claims and accusations from the Minority.

It is on this that Hanna Bissiw, reacting to the conversations, said the things she said of the Dome-Kwabenya MP.

In a further reaction, another presidential staffer slated Bissiw but in milder words. Nana Yaw Manteaw, an Executive Assistant at the Office of the President tweeted: “Wow! So people can stoop this low just for political power? You ruin curses on a fellow woman in such a manner?

“Well women they say are their own enemies, so will she be given the opportunity someday to propagate issues bothering on women? Sad!”