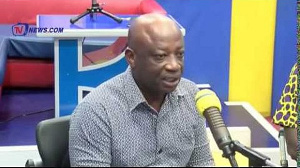 Chief Executive Officer (CEO) for the Public Sector Reforms has noted that the National Democratic Congress (NDC) thrives on the ignorance of the people.

He says that’s the reason why the party kicked vehemently against the introduction of the Free SHS that will provide access to education for Ghanaians.

Thomas Kusi Boafo believes that as time surges on, the NDC may not get people to vote for them in Ghana because people will be more knowledgeable to realize that the political party has no message and plan for Ghana.

Kusi Boafo was speaking on Kumasi-based Wontumi Radio when he made this known.

Thomas Kusi Boafo indicated that the NDC is restless because their empire f ignorant people is under siege and the party is very worried about the enlightenment brought about investments made into educating the youth in Ghana.

“If someone tells you the NDC will come and continue the Free SHS, tell the person he/ she is liar. When Nana Addo tabled Free SHS the naysayers had issues with the policy but the man said we should do it and that has provided access to education for people who hitherto would not have had the opportunity to go to school.”