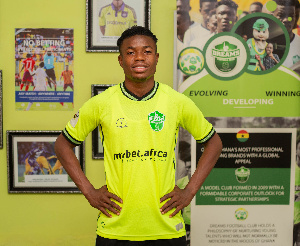 Dreams FC star Abdul Fatawu Issahaku says his team’s efforts were not enough to guarantee them a win against Eleven Wonders in the Ghana Premier League game on Friday.

Wonders and Dreams FC shared the spoils on matchday seven at the Ohene Ameyaw Park as the game ended in a 1-1 draw.

Dreams FC took the lead on the 86th minute through a thundering strike by Samuel Boakye just a few steps away from Wonders goal area.

The hosts however left it late to pull parity when Abass Ganiu turned beautifully to slot home with a left foot.

Fatawu Issahaku who has been the go-to man for Dreams FC in the ongoing campaign stated the team did not do much to win the game.

“Actually, today we couldn’t get what we wanted because it was a draw game.

“My coach gave me a task on the field today so I was not trying to make just some shoot. So that was why I was not getting my target,” he added.