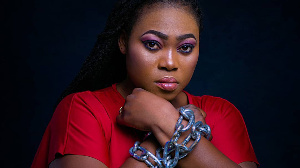 play videoJoyce Blessing has been hit with a paternity controversy

The award-winning female gospel act has been in the news recently over reports that one of her three children is not her husband’s per a supposed DNA test result.

But according to Computer Man who describes Joyce Blessing as his daughter, the entire DNA brouhaha is a ploy engineered and instigated by her estranged husband to disgrace the artist.

Computer Man believes Dave Joy is peeved by the insistence of his wife to divorce him and has thus resorted to various plots aimed at tarnishing her image.

“Joyce realized that you are not going to help her. She informed me and I told her to end it. After ending things, you decided to fight her over properties and I asked her to let it go and she did without complaining. She has been quiet all this while and out of nowhere, you’ll conspire with people to do something and disgrace her.

“I have the evidence in my custody, Joyce is my daughter. Look at what you took her through, after leaving you, everything of yours has come to a standstill. Your name has dipped,” Computer Man stated in an interview with Oman Channel.

He parried the allegations of infidelity against Joyce Blessing but rather insisted that it is Dave Joy who is known to be a philanderer, and that is what led his wife to seek separation.

Computer Man notes that throughout the marriage between Joyce Blessing and Dave Joy, he has been called upon on many occasions to mediate between the couple on issues that mainly had to do with the husband’s infidelity and maltreatment of his wife.

“We have discussed their issues ten times. Joyce started seeking divorce a long time ago. There was a time I invited Joyce Blessing to come and sing at my church. When she came with her husband, he left her under the guise of going to urinate and was later seen proposing to one of the girls who had come to church. I had to call my daughter indoors and advise her, he has troubled her with his womanizing all this while,” he stated.

Computer Man challenged Dave Joy to come out boldly if he believes there is any DNA proving the child in question is not his.