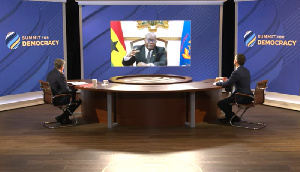 play videoPresident Akufo-Addo making his presentation at the summit

Akufo-Addo speaks at Summit for Democracy

He was one of 17 African leaders invited

President Nana Addo Dankwa Akufo-Addo was one of seventeen African leaders who joined the inaugural Democracy Summit organized by the Joe Biden administration.

The summit held virtually, took place from December 9 – 10, 2021, as the Biden administration brought together leaders from government, civil society and the private sector to discuss issues of common interest.

The State Department on its website noted that the summit was part of, “shared effort to set forth an affirmative agenda for democratic renewal and to tackle the greatest threats faced by democracies today through collective action.”

In his comments when he took his turn on December 9, 2021, Akufo-Addo said: “Thank you very much for having me participate in this very important conversation.

“I think that the American government are to be commended for the initiative of bringing together this summit and bringing together people from all different aspects of the social spectrum to look at the challenges democracy is having in this first half of the 21st century,” he added.

The major issues he raised were as follows:

• Impact of COVID on democracy and democratic values

• How no rights were curtailed during the heady days

• How Ghana arrived at the 4th Republic

No North African country was invited with West and southern Africa accounting for twelve nations while the remaining four was shared three to one between East and Central Africa.

Most countries were represented by their democratically elected presidents.

The 17 African nations invited to the summit were:

4. (The) Democratic Republic of Congo

Today, I’m hosting the first Summit for Democracy. We’re bringing together leaders from over 100 governments, alongside activists, trade unionists, experts, and other members of civil society to lock arms and reaffirm our shared commitment to make our democracies better. pic.twitter.com/bQ2jyaHmmM